The death of Francois Jacob (1920-2013) has triggered many deserved tributes and comments, as well as brought back the memories of a time and a place when Science was, different, certainly more focused and the realm of few. 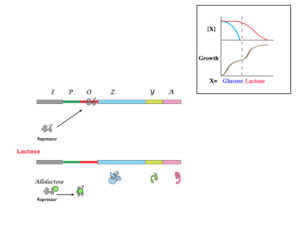 The first time I heard about Jacob was, of course, in the context of Jacob and Monod, in undergraduate Genetics in Madrid. This was a landmark moment as it showed me what Biology was capable of, that Biology could be beautiful, that one could find logic and order in what otherwise would be a mere collection of facts and that you can do it by thinking about the data. The genetics of the lac Operon and also of Î»Â became a fixation: that one could infer regulatory interactions from the analysis of mutant phenotypes was intriguing and remarkable, and I got caught. How not to? Together with Monod, Brenner, Crick and Benzer, Jacob is one of the great heroes in the adventure that laid the foundation for molecular biology and which is so beautifully and intensely told by HF Judson in â€œThe eight days of creationâ€. In a time honored french tradition, Jacob was also an intellectual and his books (The logic of the living; The statute within; Of flies, mice and men; The possible and the actual) are inspiring, beautifully written, with an alluring imaginery, a wonderful sense of history and of the interplay between society and science. They played an important role, particularly â€œThe logic of the livingâ€™, the only one of my students days, in fixating and shaping my interests in biology. As times passes and I teach his science to undergraduates it is difficult not to have a sense of awe at what he and his colleagues achieved with so little.

This is the moment of memories, anecdotes, perspective. It is surprising that young people do not know much about these pioneers but perhaps there is nothing wrong with this, after all it is already History and History is for the historians. However there is a value in looking at and reflecting on History, particularly on thinking how far have we come from those days when scientists did Science and did not have to worry about its marketing and consequences. In this regard, one anecdote has come up in some of the news titbits and obituaries of F. Jacob (see e.g https://bit.ly/14HLqT0). It refers to the event in which he had gone to the cinema with his wife and leaving the theatre he said to her: I think I have just thought of something importantâ€. It was the possibility that the regulation of prophage induction and of the regulation of the Lac operon had a common regulatory mechanism based on the binding of a protein to DNA. He was right, it was important.

Today many students, postdocs and PIs have, at times, the feeling of having found something â€˜coolâ€™, of something that is worth a pilgrimage through the reviewers efforts in HIF publication but is this something important? More to the point: do we think? Â Are we able to distinguish the important from the urgent? Visiting a lab a couple of years ago, a postdoc was busily telling me about his findings and what he needed for the submission to a journal, the experiments that he needed, what the reviewers would say. The work was interesting. At some point I began to get tired and had to say to him: can we stop talking about the publication and think about the problem for a while? I realize that it was difficult. It is a worry that we have buried important questions (which exist) in mountains of experiments and data. While we can say a lot about genes I keep on wondering if we are capable of thinking of something important.

The passing of F. Jacob reminds us of that generation which laid down the foundations of what we are doing. We should be doing the same for the next generation but, for the most part, we are too worried about publications and IFs, and OA, and too many things that clutter our minds and do not allow us to go beyond data.