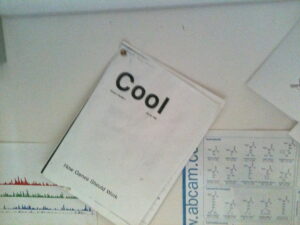 My colleague Steve Russell, a seasoned Drosophila molecular geneticist, has on a wall of his office a relic of the 80s, a copy of the only existing issue of â€œCoolâ€, a spoof Â journal that arose in response to the birth of â€œCoolâ€ in the biological sciences; you know the journal on which it is inspired. Steve is a good, serious, honest Drosophila biologist whose work has inspired students and postdocs and has helped the local and international communities in a variety of manners. Having â€œCoolâ€™ on the wall appeals to his Glaswegian humour (download Cool here).

Cool science has come to be considered a good thing and the spoof is now an accepted accolade forgetting that while â€œcool scienceâ€ is good for some things, it is dangerous for others. We like a cool pass in football, talk about cool footwear or clothing, we like cool movements in music, but in science what some of us look for is insight, rigour, impact, value, interest, depth, eloquence, inspiration. Cool science is good for the public understanding of Science, particularly to engage children and young people in it (https://www.theguardian.com/science/2010/apr/13/science-cool), which is different from what we should look for when we practice Science. I suspect that I am in a minority here, but I sense dangers in a trend of â€˜cool scienceâ€™, particularly in the biological sciences where it is becoming increasingly prevalent. My main problem is that, often, cool science is more â€˜coolâ€™ than â€˜scienceâ€™ and that the emphasis in â€˜coolâ€™ has a dumbing down effect on important questions and, certainly, a lowering of the level of proof and analysis. In many ways Cool says much of what this trend, a joke in the late 80s but a reality now, can do for Science and I can’t help but smile when I am in Steveâ€™s office and see its cover on the wall.

But, why talking about â€œcoolâ€?

Science publishing has become a complicated business. Perhaps in the spirit of the times, instead of rationalizing the system i.e thinking about what is best for the community, we have let it run loose, allowed the number of publications to increase and let the demand dictate the market. The vicious circle: more scientists, more affordable technology, more output,â€¦â€¦leads to more publications; what then distinguishes one from another? There is a hierarchy established by history (and yes by Thomson Reuter) butâ€¦.. if a new publication wants to be successful, the best way is to become â€œcoolâ€.

One of the late newcomers to the top end of the fast moving market of publications in the Biomedical sciences is eLife. A venture of heavy weight funders which aims to change the publication landscape and the way scientists perceive their publications; at least this is what they claim (one wonders why DORA is not enough). There is much to be liked and promoted about eLife and I hope it will succeed -by which I do not mean that it becomes part of the NCS (Nature Cell and Science) elite but that it creates an imprint for progressive action in other journals. Their reviewing process , for example, is particularly innovative and sensible.

It is because I want eLife to succeed that I was surprised last week by the publication of a paper. [NOTE If you are not interested in the details of this paper you can jump to the last two paragraphs]. Mammalian genes induce partially reprogrammed pluripotent stem cells in non-mammalian vertebrate and invertebrate species (https://elife.elifesciences.org/content/2/e00036). Now, this is cool! Use the Yamanaka cocktail on somatic cells from different organisms and get iPS like cells. What is the problem? There could be something interesting in the basic observation (if it were true), though it is not clear to me how one would use iPS cells from different species? In any case, I can see (and I am told by experts in the field) some problems in these experiments. At first sight, nothing earth shattering in getting iPS cells from birds and fish. Chicken embryos have been discussed in the context of pluripotency and, with regard to fish, fish Nanog can make iPS cells in mammals. Still, these experiments should be scrutinized. However, the next stunt is, if true, the stunt of the century. It is what makes the paper cool. The authors claim that they can apply the Yamanaka cocktail to Drosophila cultured cells and obtain what they call iPS like cells. Again, think about it: apply the Yamanaka cocktail to Drosophila cultured cells and obtain a cell type for which there is no parallel, nor a way to test it in Drosophila. A cell type that, if we apply all we know about Drosophila, would be equivalent to having made an evolutionary jump. Things get more interesting because the cells used as a source for these iPS-like, Drosophila S2 cells, are variably aneuploidy and heterogeneous, do not differentiate and are basically a test tube for some experiments in biochemistry and cell biology. Those of us who have worked with them know their limitations. Their claim is equivalent to saying that iPS cells have been obtained from HeLa cells. Impossible. Have they really achieved what they claim? Can one make iPS cells from aneuploids? Donâ€™t get me wrong, this all might be true and wonderful, though I cannot believe that the Yamanaka cocktail will repair aneuploidy (and iPS cell are nor aneuploidy) but standards should have been kept. Particularly in eLife.

I have posted a comment in the paperâ€™s website raising some questions. The reply of the authors makes interesting reading, particularly the bit in which they claim that aneuploidy is not incompatible with pluripotencyâ€¦â€¦â€¦..we are talking basic Biology here. I shall let that speak for itself.

There are three questions that this publication raises in my mind:

1. How come this paper was sent to review by a journal with the aspirations of eLife, when the claim was so clearly outrageous?

2. How come the review process, which is on line and can be seen, missed the flaws that are so obvious?

3. Why does this matter?

Responses to the first two questions are easy: the findings are â€œcoolâ€. eLife wants to compete with the very cool NCS, so they need cool papers and there is nothing more cool these days than iPSness (well, yes, there is also epigenetics). As has been said by Cell Press, a paper (particularly in the high end of the market) is a collaboration between the editors, the reviewers and (lastly I would add) the authors (https://bit.ly/187zMkD), so, a published papers is not just the responsibility of the authors. The editors will always look for the balance between real science and cool but the latter will work well to attract publicity so, this will often win. In fact this is currently the main criterion for publication in NCS so, if eLife wants to compete, it has to publish cool papers, and this one is not bad at that. Thus, the paper was sent to review because it was on a hot (will use this adjective for variety, not to repeat cool too many time) topic and had a hot title The answer to the second question is well known: the peer review process is a complete shambles. This publication is another example, at the high end of the market, that the system does not work, for only in this manner can it be explained that the obvious problems with this work were not picked up. I shall not dwell on it.

The last question, why does this matter?, is more interesting and although I have gone too long already, it is important to address it. There are many papers like this one published monthly, some of them in high impact factor journals. Perhaps not so blatantly misleading, but also flawed. For the most part we ignore them. We shall pan them over a cup of coffe or a beer, but we shall not go beyond this. We are too busy trying to publish ourselves (sadly the aim of the game has become the publication rather than the science), maybe we are afraid to go public with critical comments or somehow we believe that, as they say, all will â€˜come out in the washâ€™ -and sometimes it does but for the most part it does not. This is a pity, as it is our duty to highlight flaws when we see them and, particularly, when we see them in high profile journals. We should comment openly on each others work (I can hear you say: I donâ€™t have timeâ€¦â€¦and I understand, but then we need a different system to deal with the output of our work. On the other hand, Journals need to be careful. As the volume or work and the ability to perform technically sound work increases, the value of the analysis and interpretation of the results, decreases. Cool is an idiom, a trend and has become an important part of our society but in Science it has two edges: good to attract young people to Science, to show the public the interest and the excitement of what we do, but dangerous if it becomes part of the work itself.

When thinking about cool, remember some of the origins of the financial crises in which we are immersed. It resulted from the collusion of a number of elements and circumstances but there was one that grew up and corroded the system: the financial instruments and models that led to the creation of something out of nothing. Â They were cool, very cool, and they were sold as such; but they were not rigorous and increasingly, as they became more cool, they became more unreal and ended up having a cooling effect on the economy and society. Letâ€™s make sure that this does not happen in Biology.

PS: Cool appeared in the late 80s in many FAX machines all over the world. It was clearly ahead of its time. As far as I recall there were no restrictions on its dissemination and therefore its reproduction here is on the basis (promoted by the journal) that Cool should be spread for the benefit of cool science.