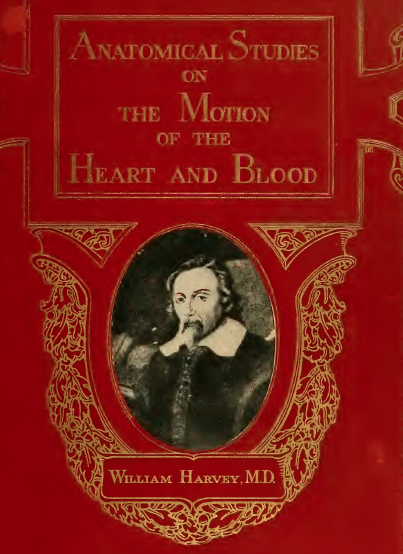 It is well known that history repeats itself but, as we have limited memory and a tendency to think about ourselves and our times, we forget the lessons from the last time it came around. Let me tell you a story. Like many of you I associate William Harvey with the wondrous discovery of the circulation of the blood and the identification of the heart as the pump that keeps this movement going. I also was aware that he performed the first proper or recorded measurement in biology as the amount of blood going around the body in a given period of time. This was to show that for the number to be true the blood could not be supplied by some infinitely powerful source in the liver but most likely, circulated. As a developmental biologist I was also aware of his late book on the generation of animals (Exercitationes de Generatione Animalium, 1651) in which he describes the development of many organisms, with a particular emphasis on chickens and deers, and speculates on their embryological origin. In fact, this book was a summary of research conducted over many years which he would not have published had it not been for the intervention of George Ent, a friend who was aware of this work and encouraged, almost obliged him, to let it out . In many ways and despite its frontispiece (Omnia ex ovo), the book is a minor work compared to “de motu cordis” and, as has been acknowledged by historians, has more questions than proper answers, but does represent a major contribution to the development of embryology. These facts I knew, but a recent reading of the excellent book â€œCirculationâ€™ by Thomas Wright, on the way Harvey worked out his theory about the heart, alerted me to facts I did not know, which made me realize HOW he worked out his remarkable conclusions. The process that led to “de motu cordisâ€ made me see some features of his research which are interesting in the light of modern science.Â

Harvey was a doctor who rose very quickly to a position of prominence in the London establishment. He had attended Cauis College in Cambridge (as my colleague David Summer never ceases to remind me!) and then, impelled by the flow of the time, went to Italy to follow his interests in Medicine and Anatomy; aÂ  graduate study of sorts. It was there, in Padua, where where he became acquainted with the issues of the time in particular the details of the behemoth that was Galenic medicine.Â  Amidst his teachers there was Fabricio de Aquapendente, aÂ doctor with an interest in anatomy and who was a pioneer comparative embryologist and who became a significant influence in Harveyâ€™s studies. The organization and function of blood was a central issue of study at the time where the centuries old views of Galen prevailed. Essentially, blood mainly manufactured in the liver, ebbed and flowed through veins and arteries to end in the tissues within an open ended system. The heart was the source of heat and of the spirit, and acted as a sort of mixing blender; though an important organ it was not so important as the liver. There were alternative, speculative ideas around about the heart and Harvey took note of them. After his studies, he went back to England and quickly rose through the ranks in London medical society to become associated with the court, teaching anatomy and, eventually, becoming the Doctor of the King, most notably of Charles I. But all this is secondary to this story.Â  In the back of his mind, though, was the question of the workings and function of the heart. In a series of remarkable experiments conducted over a period of more than 10 years (a core of 1615-1625 can be identified by experts) in a laboratory set in his house, he developed and reasoned the theory that the heart was a plumbed pump that moves blood around the body. As a consequence of this study he assigned the correct function of veins and arteries and identified the direction of the circuit. Now, and here is my point. The knowledge came from a comparative study and without such a study he could not have reached the conclusions or, better, the detail supporting the conclusions. By comparative I mean, comparing different organism on the correct assumption that there is a conserved plan. You should read Wrightâ€™s book. It is a gem.

The studies began with corpses that he procured because of his association with hospitals but then, if you want to think of a pump, you need to see it at work. He did that, as it was customary at the time, with vivisected animals, principally dogs. A bit sensitive these days and as Wright points out, no less then but, on the other hand, necessary. One of the issues at stake was the function of the systole and diastole, the periodic movements of the heart which result in its physiological outputs. There was a debate as to which was the active phase and was a problem as all Harvey had to solve it was direct observation. The movements are too fast in mammals for him to discern the relationships between the actions and the consequences, with regard to the blood, and he puzzled and surely wrestled with his intuition and the facts. Notwithstanding this, as the animal died, the movements slowed down and he could get glimpses of how the system worked. But he needed to prove it in the living organism. Here is where it gets remarkable, at least in my eyes. In a series of studies, he looked at the circulation of the blood and the activity of the heart in a range of organisms from slugs to dogs, but paying special attention to cold blooded animals where the movement was slowed. In a particularly interesting study he watched the relationship between the pumping of the heart and the movement in some fish he got from the Thames. You cannot miss it in the glory of the zebra fish, as my colleague C Schroeter who worked with this organism remarked: it is a wonderful thing to SEE the blood leaving the heart through the aorta to the beat of the heart and this is published even if Harvey had seen this 400 years ago. These observations buttressed his views and made a seminal point for the circulation of the blood. Let me highlight the point: it was the model organisms that established in Harveyâ€™s mind the universal principle that changed medicine and our notions of the heart forever. Of course, as you might have expected, when he put his views to the then public peer review, amidst many of the questions that came up, that of the actual value of the functioning of the heart was one of them but, another one was the value of the events in frogs and fish to humans. We would say that it was the XVII century but if you think about this you will find a parallel in today where the drive towards human biology often forgets and renegates of how much we have learnt from model organisms.Â 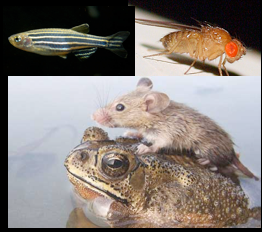 One very important point is that Harvey used the different organisms to answer an important question and this can be easily lost in the fog of today’s emphasis on publication and superficial â€˜noveltyâ€™.Â  The major contributions of model organisms to current biology have been on important, general questions. The principles of genetics were worked out in plants and animals but this was not the place to look for the molecular nature of the gene. This required going to phages and bacteria on the assumption, which turned out to be correct beyond expectation, that it would be universal. This was the same as with Harvey (a fish heart is a heart as much as a human heart â€“ much to mull over on such statement in the XVII century), and also guided us to unravel the genes that drive development -using flies and worms- the principles of early development -with frogs and chickens. In all cases, model organisms, as we have come to call them, have been instrumental. The current focus on mammalian and, in particular, human biology and the attempts to sidestep model organisms should take stock of the fact that model organisms have been a staple of medical and biological research since the times of Aristotle and that great discoveries, like that of Harvey, could not have been made without them.Â

I want to end up with another, perhaps more subtle, analogy with the events 400 years ago. Harvey faced a problem, a serious one. The whole of the medical profession at the time was built around Galenic medicine. The open circulation model created an array of easy to implement cures for a variety of diseases through bleeding that were performed by the physicians at a costly price. If Harvey was right the whole system needed to change and many of his colleagues were, as it indeed happened, out of business. Sometimes the lessons from model organisms are hard to take and many people will resist them.Â

There is an ongoing debate about the importance of supporting research in model organisms and as someone who has spent many years working with Drosophila I am in favour of this. However, it is important that we do not lose sight that the relevance of a model organism is related to the significance of the question that one asks in it. The technological advances and the cottage industry that has emerged around them leads some times to derivative science which has no other purpose of the publication. Let is use model systems but, like Harvey, to answer a good question; only then they will be vindicated and we shall put them in their rightful place.

There is also an excellent movie about Harveyâ€™s experiments: https://archive.org/details/WilliamHarveycirculationoftheblood4-wellcome

NB The image of the frog on the mouse is taken from https://letsbefriends.blogspot.co.uk/