A pdf version of this post is available here.

An excellent recent meeting in Oxford on morphogens (EMBO Morphogen workshop) gave me an opportunity to think about this notion in relation to a molecules and a signalling event I have been watching, sometimes gazing, for a long time: Wnt.

The notion of â€˜morphogensâ€™ was introduced by A.M. Turing in his classic paper on the chemical basis of biological pattern formation (1). The thought emerges from the consideration of â€œmasses of tissues which are not growing, but within which certain substances are reacting chemically, and through which they are diffusing.â€œ The substances, which lead to spatial patterns, are called morphogens, â€œthe word being intended to convey the idea of a form producerâ€ (1). Later this notion was developed further and knocked into its modern shape by L. Wolpert, particularly in his 1969 paper (2), where he introduced rigorous criteria for such substances based on Biology, something that was missing from the original Turing analysis which, incidentally, had a very different aim from the one that it is often associated with: Turingâ€™s work is a proof of principle rather than a theory with specific aims in mind. Ever since Wolpertâ€™s formulation, morphogens came and went until the genetics of model organisms revealed molecules which did fulfil, to a certain degree, the criteria established by Wolpert (2-4). These criteria, as commonly understood and accepted, are that the molecule 1) be distributed in a gradient; 2) the gradient needs to act long range; 3) the concentration gradient needs to be decoded into a number of discrete states in a concentration dependent manner; in the case of Wolpertâ€™s original formulation, this were the colours of the French flag (2). Over the last twenty years three molecules have earned the accolade of morphogens, sensu Wolpert, BMPs, Hedghehogs and Wnts, with others being said to perform this function in particular situations. Most of the crucial experiments have been performed in Drosophila (5-7) and while BMPs and Hedgehogs pass the test with more or less flying colours, Wnts are (as you will see) a different matter.

Wnt proteins are secreted polypeptide which play a signalling role in the Biology of the cell (see note at the end for more information); the only detail that is important here is that the transcriptional effector of Wnts is a complex between ÃŸ-catenin and Tcf (8). The notion of Wnts as morphogens is founded on one, and only one, observation: its expression and perceived function during the development of the imaginal discs of Drosophila. 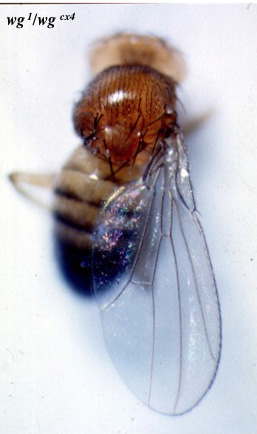 Imaginal discs are groups of cells set aside during embryonic development which grow hidden in the larva until they emerge to form the adult fly during metamorphosis. The development of these groups of cells has been the subject of a great degree of scrutiny over the years and we do have a fairly good understanding of them at the moment. The wings of the fly emerge from the structures called the wing discs sometime in the early stages of larval development (Figure 1). In the context of this note, the important features of the wing primordium are clear in the third larval instar: a large disc of cells which presages the wing bisected in the middle by a stripe of cells expressing Wingless, the Drosophila homologue of Wnt1. The gene being called wingless for the loss of the wing that follows the loss of function of the gene (see Figure right). This stripe bisects the disc into a dorsal and a ventral domain (future sides of the wing), where it has been suggested that it generates nested domains of three genes, from broader to narrower: Vestigial, Distalless and Senseless (9-11). The stripe is first visible when the disc is small (but not when it is very small) and has been blamed for the growth and the patterning of the wing. In fact, it is the presumed activity of this stripe controlling growth and nested gene expression that earned Wingless its morphogen status and that forms the basis for its general understanding as a Morphogen (9-14).

This observation was first made using a temperature senstive allele of wingless , in the first analysis of the role of Wingless on the development of the wing (15, specially Fig. 5) and was repeated later with modern techniques removing both the ligand and the receptor (16, specially Fig. 1). In all cases, the result was the same, which is a good thing and something one would like to see more of in Drosophila. So, what is going on?

This observation raises two issues, one scientific, the other more inÂ the realm of the sociology of Science. The first one concerns theÂ function of Wingless signalling and, by extension of Wnt signalling inÂ development. This is an interesting matter which has been followedÂ up, away from the morphogen notion, in a number of reviews andÂ discussions and I suggest that, if you are interested, you look at themÂ (17-21; as well see also the two appendices here). The surprisingÂ observation (surprising in light of the commonly held view to the opposite) opens many questions though, since one can obtain phenotypes during the development of the wing with some gain of function forms of elements of Wnt signalling (see Suppl Mat in 22) or, more surprisingly, in mosaics of patches of loss of Wingless function in wildtype wings (23). Why is it then that loss of function in the whole wing does not affect growth but in patches it does? There is something interesting here and I am sure that it will be explored; it certainly needs to. The issue of WntÂ signalling itself, which is independent of whether it or it is not a morphogen, is also in need of a serious revision (24; you may want to read this in the form of an appendix at the bottom). I could discuss these important matters at length here but will leave this for another occasion (and promise that I shall). The main objective of this post is to bring up this important and, apparently little known fact about the function of (or lack thereof) Wingless in Drosophila.

The second issue, that of the sociology of science, is more complicated. Why was it (and actually still is) that despite the observation of the lack of function of Wingless on the growth of the wing â€“at least from the perspective of loss of function-, there was a deluge of papers on Wingless as a Morphogen? How come an important observation took 20 years to be repeated (work was built upon it, though it was ignored e.g 25-27) and instead experiments were done and interpreted in a light that conflicted with the main observations? The number of papers supporting the notion of Wingless as a morphogen in the 1990s is large, but if one looks at the results supporting this notion and the experimental design behind them one can see a degradation of rigour and how an idea can take over the facts. In fact, there was little evidence for the claims of many of these papers (discussed in 25-27) and more parsimonious explanations (e.g 20) were consistently ignored. I guessed the seduction of the morphogen view is too powerful.

What is a matter of concern is that the notions derived from the belief that Wingless is a morphogen that controls and patterns the wing of Drosophila have served as a template for the understanding of Wnt signalling in other systems, where the evidence rather than weak is non existent.

The story of Wingless and the Morphogen is very reminiscent of that of Phlogiston, a substance that was thoughts to be a universal component of most material on earth and which was liberated upon combustion. The problem was that as measurement fuelled the birth of chemistry, the notion emerged that Phlogiston needed to have negative mass-and many people were not bothered by this. Phlogiston gave way to Oxygen, as Priestly and Lavoisier showed later on, which was a more interesting and real explanation for the experimental results. However, while it lasted the notion of Phlogiston provided an implausible and absurd, but obviously satisfactory, explanation for an interesting phenomenon. The Morphogen property of Wingless is the Phlogiston of Developmental Biology. The strange thing about the case of Wingless was (and is) that the evidence was there from the beginning but most people decided to ignore it.

Perhaps this is a reflection of the way Developmental Biology has worked for the last twenty years: mutant>gene>idea>match>paper>new mutant>new gene>epistasis>idea>fact that ignores the experiments. There are notable exceptions, in particular the early development of Drosophila, where the tight interactions between transcription and the processes have led to a deep understanding of the processes involved. However, when it comes to cells, there is much that we need to learn in terms of methods and approaches. Unfortunately, misunderstandings and misinterpretations about Wingless and Wnt signalling are still ongoing (24) and need to be corrected. Fortunately, things are changing in developmental biology and the EMBO workshop in Oxford ushered a new era, more quantitative and analytical. I suspect that this will benefit Wnt signalling as the notion of Wingless as a Morphogen is like Phlogiston was to Oxygen, it obscures something much more interesting that lies behind the observations that I have mentioned above (15, 16).

Epilogue: The trigger for these lines was a talk at the Morphogen meeting in Oxford by one of the old time Wntologists of Drosophila, a prestigious and much acclaimed scientist. After delivering a whole talk on Wingless as a morphogen in the wing, he was asked what he made of the fact that removal of Wingless during the time that it was supposed to act, had not effect on the development of the wing. He said he was not aware of those facts or papers. Of course, why bother with inconvenient facts? I also want to acknowledge the contribution of JP Couso to the notion of Phlogiston in the context of Wingless signalling in Drosophila.

NOTE: For those interested here you have, in pdf form, two essays. One (24) is a primer that I wrote at the request of PLOS Biology about Wnt signalling. It was rejected because, after submission, the editors and the reviewers thought that everything I said was known; judge by yourself: if it is known why is it ignored? I could update it but its essence will remain the same. It contains some of the internal contradictions of the current views of Wnt signalling. The second one (28) is less formal and is a little piece that I wrote for Sean Carroll, after a conversation in which he asked me to summarize for him my thoughts about Wnt signalling. These form the basis for a piece in BioEssays (17). It does contain some jargon but some of you might find it interesting. In terms of wing development, from the perspective of the DV axis, I suggest you read 18, 20, 27 as well as 29-31 and, please, think and do not listen to the mermaid morphogen songs.

22. MuÃ±oz Descalzo, S., Tkocz, K., Balayo, T and Martinez Arias, A. (2011) Modulation of the ligand independent traffic of Notch by Axin and APC contributes to the activation of Armadillo/ÃŸ-catenin in Drosophila. Development 138, 1501-1506.

27. Klein, T. Martinez Arias, A. (1999). The Vestigial gene product provides a molecular context for the interpretation of signals during the development of the wing in Drosophila. Development 126, 913-925

28. Thoughts on the function of Wnt signalling (for Sean Carroll) Download here